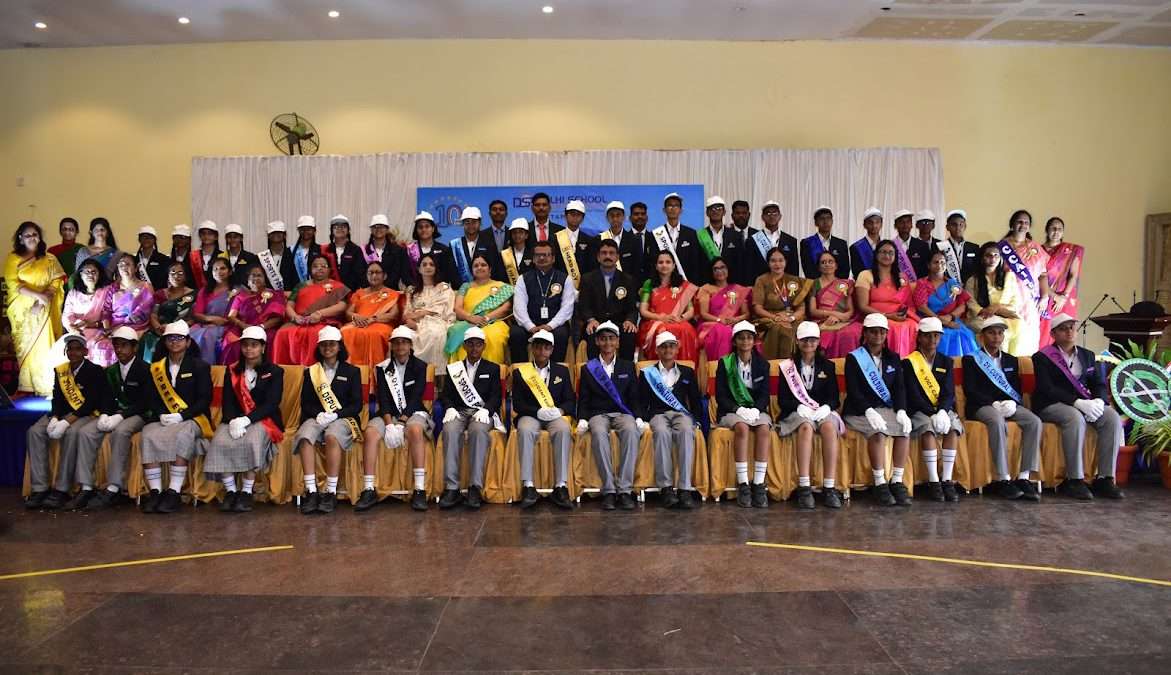 An unfolding bud, amazes us by taking richer colour and dimensions with each passing day. A child too transforms by progressing gradually day after day, revealing its innate potential. From enjoying the colours of the rainbows to building up colourful dreams and striving to achieve them; the transformation is alluring. True to the vision of the founder, Shri P Madhusudhan Rao, DSE believes that every student is like that unfolding tiny bud which is uniquely colourful and fragrant and provides a healthy platform to discover new dimensions in one’s persona. The Investiture Ceremony-2022-23 is the very testimony of the school’s conviction to facilitate its best to the student community.
The Decennial Investiture Ceremony of the school was held on 21 July 2022, at P.R Palace, Hyderabad, where the future leaders honed under the canopy of DSE marched in crisp uniforms and blazers to assume their posts in the School Council. The chief guest of the occasion Shri. Ramanuj Narayan, Senior Principal Scientist, Chairman of Polymers & Functional Materials Department at CSIR and Dean of Chemical Sciences of ACSIR, presided over the event along with the members of the Management, Principals and Headmistresses of sister institutions. The proud parents of the newly bestowed student council joined the occasion making it more memorable.The ceremony started off with the much-revered lamp lightening and prayer that dispels darkness and ignorance. The event proceeded with tributes in fond reverence of the Founder Chairman, late Shri P Madhusudan Rao Sir, whose vision remains the driving force of DSE. The invocation dance, while setting the aura, welcomed the entire gathering.
The much-awaited pipping ceremony that invested the student leaders began with the chief guest badging the Head Boy and the Head Girl, the torch bearers of the school prefectorial body followed by the other student council members, donned by the Vice Chairperson Shilpa Ravi ma’am Secretary DSE Group of Institutions Ms. Rama ma’am, Academic Director, Sashi ma’am, Administrator, Reshmi ma’am, Principal Mr. Augustine Thomas, Vice Principal Bharti Ma’am and Head Mistress Lakshmi Gowri ma’am. The oath of office to the Student Council was administered by the Chief Guest, Shri Ramanuj Narayan who in his message encouraged the students to set a goal and achieve success. He advocated the students to read, to introspect and to observe the surroundings to comprehend the practical aspect of science. The students were urged to derive inspiration, to enjoy everything they do and to adopt sustainable living. While he wished the students the best, he also appreciated the students, teachers and the management for organizing such a thought provoking event.
The Head Boy and the Head girl, acceded their responsibility by pledging allegiance to the school rules and thanked the School fraternity for believing in their capabilities and supporting them to be the flag bearers of the School’s pride and honour. Thus, the bequeathed leaders pledged their loyalty and complete integrity in discharging their duties.

The event acquired great significance with the unveiling of the Alumni wall which is etched with the success stories of former Deesians, thereby connecting the past with the present into the future. This also provides an opportunity for the former students to look back and reciprocate their gratitude while inspiring the posterity.

The event was pepped by the Jerusalema dance challenge that advocated hope, trust, confidence and mutual cooperation.

The Principal Mr. Augustine Thomas applauded the student members and exhorted them to stand as role models for the young students to look up and learn from.

The discipline Incharge and the Cultural Secretary proposed the vote thanks conveying their gratitude to each and everyone who have contributed to the success of such an event.
The event concluded with joyous students serenading the National anthem as their hearts swelled up with the pride of bringing laurels to their parents and the institution.